Coronaviruses have sparked some massive disease outbreaks in living memory, but we’ve actually been battling them for millennia, according to a new study.

In 2002 a coronavirus sparked what became known as the SARS outbreak in China, infecting over 8,000 people and killing more than 800 – SARS stands for “severe acute respiratory syndrome”.

And currently, we’re dealing with multiple strains of SARS-CoV-2 — the virus that causes COVID-19.

Now, a team of Australian and US scientists has discovered that a coronavirus epidemic broke out in East Asia around 25,000 years ago and lasted 20,000 years.

According to their study, reported today in Current Biology, evidence of this can be seen in the genomes of modern-day people from the region.

“It wreaked havoc in the population and left significant genetic scars,” said study co-author Kirill Alexandrov, a synthetic biologist at the Queensland University of Technology.

The history written in our genes

Like the rings of a tree, our genetic code can tell a story about events in our ancient past.

Random mutations to our genes mean some people are naturally more susceptible than others to being infected by viruses or developing serious symptoms of disease.

For instance, a recent study found that people who carry a cluster of genes inherited from Neanderthals some 50,000 years ago have a higher risk of developing severe COVID-19 symptoms.

But other mutations do the opposite, and can give us a survival edge when disease outbreaks occur.

And people with these gene variants are more likely to reproduce than others.

“So what happens over several generations is the gene variants that are beneficial will rise in frequency,” said study co-author Yassine Souilmi, from the University of Adelaide.

“And that leaves a very distinctive mark several generations later.”

But it takes a minimum of 500 to 1000 years for this signal of “adaptive markers” to show up in a populations genome, Dr Soulimi added.

Dr Soulimi and colleagues hypothesised that humans might have had ancient encounters with coronaviruses that could show up in our genome.

So they surveyed the genomes of thousands of people from around the world stored in the 1000 Genomes Project database. 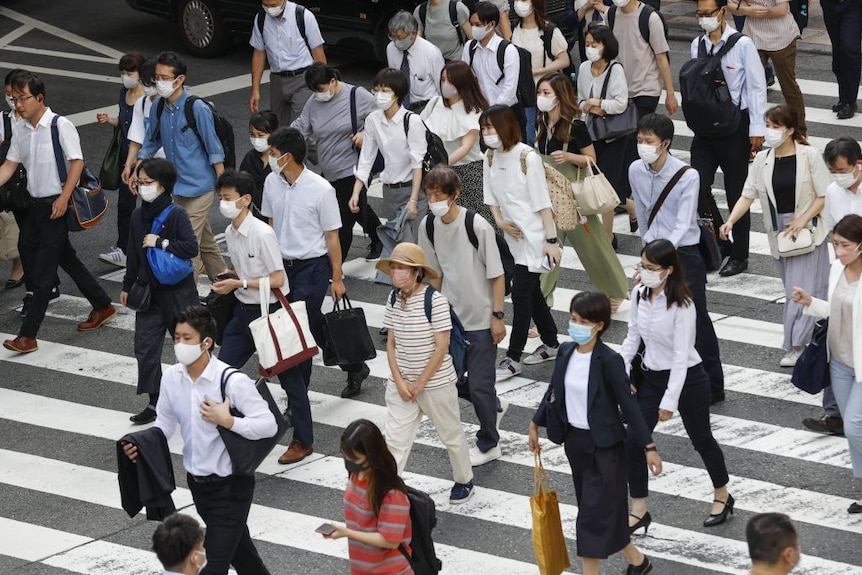 “After we observed this signature of adaptation we used different tools to tell us how far back that adaptation might have happened,” Dr Soulimi said.

“Adaptation seems to have started about 25,000 years ago.”

Not only is this the earliest evidence of human exposure to coronaviruses but it also shows how long they can hang around.

The researchers found the virus appears to have stopped exerting evolutionary pressure on the genomes 5,000 years ago, which means the epidemic lasted around 20,000 years.

“We really can’t tell if this was a periodic thing that occurred every winter like the flu, or slightly different viruses that jumped from animals to humans every five to 10 years like what happened in the past 20 years with SARS, MERS, and SARS-CoV-2,” Dr Souilmi said.

It may have been a single virus or a series of viruses that use the same molecular machinery, an idea supported by other research that shows the viral family that SARS-CoV-2 belongs to, emerged about 23,000 years ago, he said.

But either way, what’s clear from the research is humans were exposed to coronaviruses for a period of roughly 20,000 years at one point in our history.

“The adaptation of several genes around the same time and at the same rate can only be explained by the exposure to coronaviruses back in time,” Dr Souilmi said.

The researchers also found evidence that the virus involved in the ancient outbreak invaded cells in a similar way to SARS-CoV-2.

Looking to the past for clues about the future

Unravelling the evolutionary story of past coronavirus outbreaks can offer clues on how to respond to future pandemics.

“[It’s] extremely informative about how viruses spread and how long they stick around for,” Dr Souilmi said.

And tracking genetic adaptations can help researchers pinpoint which genes are the key players in our body’s response to infections.

“This can inform drug and vaccine development efforts. Sadly, it also tells us that we have more epidemics to come,” Dr Souilmi said. Having this information before the start of the COVID-19 pandemic could have taken us a few steps ahead in our response, Professor Alexandrov said.

“We probably could have had better and more diagnostics in place, more frontline drugs, and maybe some initial tests for vaccines,” he said.

“We wouldn’t have had a cold start.”

Denis Bauer, who specialises in bioinformatics and genomics at the CSIRO, said that while the findings were interesting, more work was needed to understand how these genes evolved.

“More research is needed to confirm that these genomic changes across multiple populations are indeed in response to a coronavirus,” said Dr Bauer, who was not involved in the study.

Here’s what you need to know about COVID-19 in Australia:

Vicki Jackson, a statistical geneticist at the Walter and Eliza Hall Institute Of Medical Research, agreed that uncovering the links between genes and viruses can help us tackle new diseases.

“This research will help with identifying drugs for repurposing for the treatment of COVID-19, or other coronavirus diseases, which will inevitably emerge in the future,” Dr Jackson said.

But she emphasised that factors such as access to healthcare and following public health measures were now more likely than genes to influence whether you get sick.

“Things like the job a person does, existing health problems, and socioeconomic disadvantage are more likely to have an effect an individual’s risk of disease,” she said.

Dr Souilmi said it was not possible to know how much individual genetic susceptibility is responsible for people getting sick, but said factors like social distancing, mask wearing and contact tracing were more important.

And while a 20,000-year-long coronavirus outbreak sounds scary, Dr Souilmi has some comforting parting words.

“We had no medical knowledge back then, no public health policy, vaccines, or coordinated response to tackle an epidemic,” he said.

“The proof we can get viruses under control is what we pulled off with the Spanish flu, and to a certain extent the Ebola epidemics.”

Want more science from across the ABC?

Science in your inbox

Get all the latest science stories from across the ABC.

Your information is being handled in accordance with the ABC Privacy Collection Statement.