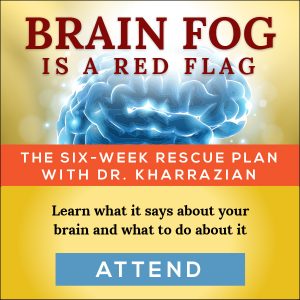 Do you suffer from the following symptoms of brain fog?

If so, you may have brain inflammation.

Why does this matter?

Because brain fog can lead to early brain degeneration that may be irreversible if caught too late.

Dr. Kharrazian will teach you which steps to take and in which order to address your brain symptoms in the Save Your Brain: The Six-Week Rescue Plan online course.

When you sprain an ankle, you know something is wrong because of the pain, redness and swelling. But an inflamed brain doesn’t hurt.

Instead, it causes fatigue, foggy thinking, forgetfulness, lack of motivation, and depression. People don’t realize these are symptoms of poor brain health.

This is because the brain’s immune system does not have this “off-switch,” and inflammation can crawl through the brain like an unchecked fire, destroying tissue along the way.

This accelerates brain aging and raises the risk of Alzheimer’s, dementia, Parkinson’s, and other brain degenerative diseases. Brain inflammation can even lead to psychiatric mood disorders.

These are mechanisms explained in more detail in the Save Your Brain: The Six-Week Rescue Plan.

Causes of brain inflammation that functional medicine can help

Food intolerances are a major cause of brain fog

One of the more common causes of brain fog is a food intolerance, particularly to gluten. Many people have banished brain fog simply by going gluten-free. In fact, research shows gluten is linked to a variety of neurological and psychological disorders.

Nobody but you cares about your brain — don’t wait until it’s too late!

Nobody else will care about your brain health — that’s up to you. Don’t wait until it’s too late!

To learn how to address your brain fog with functional medicine, join the Save Your Brain: The Six-Week Rescue Plan community. You’ll learn tools you’ll use lifelong and that could very well save you from a neurodegenerative disease such as Alzheimer’s or dementia.